Seamus Allardice shares with us his recent Leopard Trail Run experience in a two part blog series. The three-day stage race covers a distance of approximately 67km, which included running, hiking and kloofing, through one of the most remote places in the country, Baviaanskloof. 50 kilometres down a gravel road, between the imposing sand stone massifs of the Baviaans and Kouga Mountains. It is isolated geographically from the outside world. Our trail running adventure would take us to an even more remote region within the Baviaans though, for the Leopard Run. 8 kilometres up a narrow valley, off the main Baviaanskloof, we gathered for the trial run of the Leopard Run, a three day trail running stage race. Based at the beautiful Cedar Falls farm – where hardy sheep and vegetables are cultivated as they were one hundred years ago – the trail run follows an established hiking route. But don’t let the established trails fool you – the routes are along technical mountain tracks which require intense focus virtually every step of the way.

I, it should be said, am a begrudging runner. I don’t run often. And when I do I tend to over-extend myself for signing up for big runs – like this one – because I don’t want to miss out just because I’m not conditioned enough. It’s probably not a sensible approach, but once you’ve struggled through a 30 kilometre trail run you realise it’s not that hard... It just takes me longer than it does the real runners. Being poorly physically prepared was fortunately offset by excellent gear preparation thanks to First Ascent. With summer edging inexorably closer, they have just launched their new trail running apparel range of X-Trail gear for the busy season. Kitted out with the comfortable X-Trail Shorts, breathable X-Trail Tee, X-Trail Edge Visor, Fusion Tee, Hush Minamalist Pack  and a pair of Soft Bottles I was ready for everything the Kouga Mountains had in store.

Driving down the Nuwekloof Pass, through the Baviaanskloof Sleutel, and into the kloof is always a special experience. Every twist and turn in the road takes you further from civilization and most importantly further from cell phone reception. Being able to switch off from WhatsApp messages, emails, and even social media (well sort of as there was WiFi and I had to upload Instagram Stories every evening when the WiFi came on with the generator for two hours) for a weekend is a welcome relief. About 10 kilometres into the kloof the sign for Cedar Falls came into view on the right and I turned off the main gravel road onto a jeep track into the mountains. The road to Cedar Falls is navigable in a normal car, as long as you don’t have low-profile tyres. But it does take some careful driving when crossing the river which snakes across the road four or five times in the 8 kilometres to the farmstead.

I was one of the first to arrive, so I had an hour or so to kill before the rest of the crew arrived and we set out for the first adventure of the weekend; a kloofing mission. Setting out at 15:30 the sun was already threatening to dip behind the high mountain peaks and an icy wind was whistling down the kloof. So we packed warm gear into our hydration packs and set out for the waterfalls which give Cedar Falls their name. In typical Zane Schmahl style – the route was a little trickier than the event organiser had explained at base camp. Rather than the two swims Zane had warned us of there were five. The problem wasn’t the temperature of the mountain water however, but rather the icy wind evaporating moisture off us as we scrambled from pool to pool on our way to the waterfall. Once at the furthest pool we took turns swimming out to fill the Leopard Run bottles Zane had given us to fill with mountain water from the waterfall. That bottle of crystal clear water is in my fridge at home, waiting for the next whisky club get-together. 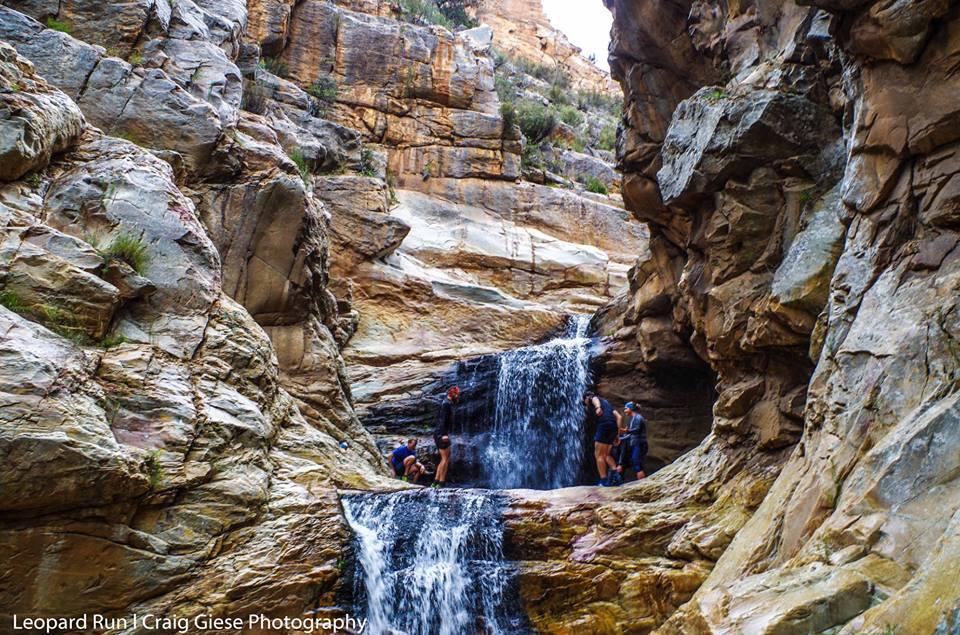 Heading back down the kloof, sopping wet and with the wind whipping at our freezing bodies, required a high speed scramble. But it was definitely a great way to kick off the weekend.

The second day of the Leopard Run was set to be a big day in the mountains. Zane estimated that along with the distance we would have 1 500 meters of climbing to contend with, which ended up being an over-estimate – fortunately. Kitted with two 300ml soft bottles, a litre of energy drink in the Hush Minimalist Pack’s reservoir and trail snacks for six hours on the trails I set out with the rest of the group.

The route for the day featured climbing from the start. Ascending from Cedar Falls over the first of three saddles, which link the Kouga Mountains proper to their foothills, we gained 250 meters in elevation within the first five kilometres. Then it was down into a valley, and up over a saddle. Each climb and descent was a little steeper than the one which preceded it, and a lot more beautiful. The views, though spectacular, required stopping to appreciate. The technical nature of the trail meant that you had to constantly watch your step. Fortunately the sheer nature of the trail meant that frequent micro-rests were mandatory, allowing for moments to admire the views. After about 10 kilometres we reached the top of a kloof and turned to follow it downstream towards the Baviaanskloof itself. In the kloof the trail conditions improved and allowed for relatively easy running, with the potential to lift your gaze and take in the sights too. In places the sand stone walls of the kloof pressed close together, pinching in upon themselves. In others the kloof widened, allowing the stream in its bed to disperse to a sluggish meander. Throughout the kloof the vegetation was dense; tickets of torn trees were growing back after a fire two years ago. It was perfect for kudu; which we saw spoor and dung of, but never managed to spot the illusive antelope. 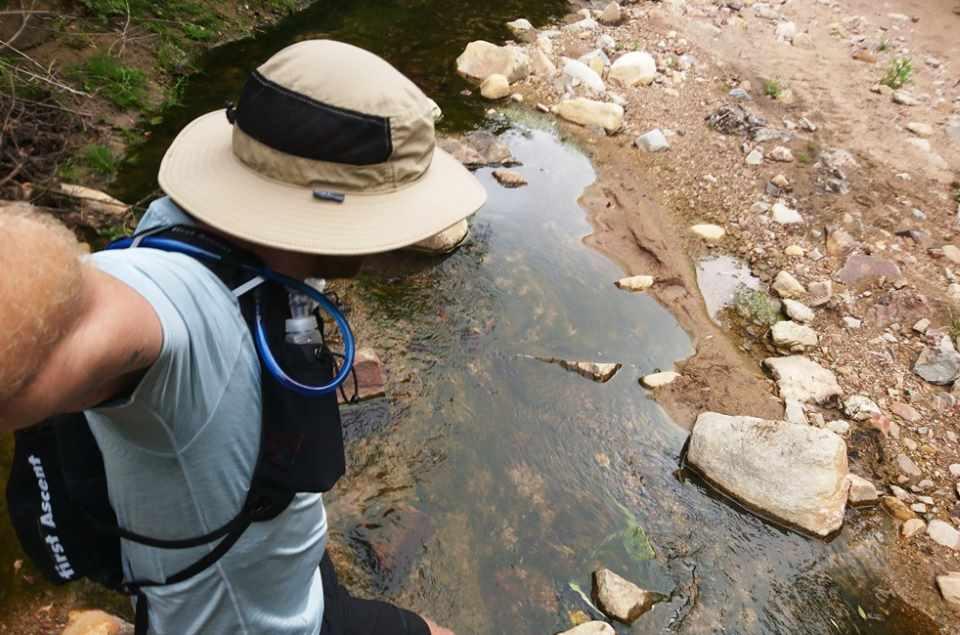 Near the end of the kloof we reached the day’s first and only water point where the EcoBound team had set up a spot for us to restock. Located at one of the hiking trail’s overnight stops the water point provided the opportunity to refill my soft bottles before the day’s major climb.

To reach the climb we had another kloof to trot up, working out way upstream. Unlike the earlier kloof this one had suffered far more from the recent fire. That, along with the winter floods made the trail hard to follow. But as we knew we were heading upstream we couldn’t really go wrong. Soon we were at the foot of the climb, a switch-back trail up a steep scree slope. At the top we met the photographer, videographer and the faster members of the group. Craig Giese, the photographer, and Andre Hugo, the videographer, then made us run hill repeats so they could get the perfect shot. Given the wind whipping around the cliffs upon which he was perched, it took some fancy flying from Andre to get the shot he wanted with the drone before we could continue with the ascent. The bulk of the day’s ascent completed the rest of the climb was mercifully gradual. From that summit two low saddles separated us from the Cedar Falls valley, but the long hours on my feet were beginning to take their toll on my knees. Conscious of the 24 kilometers still on the cards for the final day I hiked the rest of the route back to base camp. This did provide more opportunities for admiring the views though… So there was some reward for my slow going.